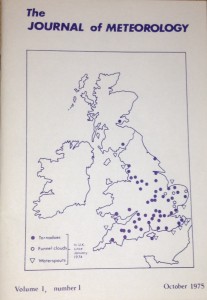 The Journal of Meteorology was set up in 1975 in conjunction with TORRO – the TORnado and Storm Research Organisation by its founder Prof. G. T. Meaden. His aim was to document the research of TORRO on British and Irish tornadoes and other types of severe weather.

After 27 years of publishing, managing and editing entirely by hand, Terence handed over the Journal to Dr. Robert K. Doe in 2002. Robert continued the success of the journal enhancing print quality, creating a website and increasing readership. Because of the increasing readership and contributions from around the world the Journal became the International Journal of Meteorology in 2005. Samantha Hall took over as Editor in 2006 and continued through until 2012.

In September 2012 Paul Knightley, the current Head of TORRO also took over as Editor of the International Journal of Meteorology, supported by TORRO staff.

Not for profit
We are a non-profit organisation which has thrived over the past decades … a real testimony to the dedication, commitment and passion the Journal exudes.